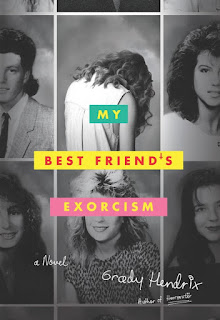 It's 1988 in Charleston, South Carolina, and Abby's best friend, Gretchen, is no longer acting like herself. Ever since that night when they tried LSD and Gretchen went skinny dipping, Gretchen's been a little off. Are the friends just growing apart like friends sometimes do? Or is there something more sinister afoot? A demonic possession perhaps?

This is Hendrix's second book, after the Ikea-scary-story Horrorstör, and once again, he's created a horror novel that's both creepy and full of fun. The 1980s are on full display here, and despite the use of '80s song titles as chapter headings, it doesn't feel contrived. Like Heathers on steroids, it's well worth a read, but be warned: you're going to be scared, if only by the memory of the hairstyles and trends you embraced 30 years ago.

(Bonus: the first and last pages, as well as the endpapers, are done as a 1980s-era yearbook, complete with goofy ad pages and scrawled notes from classmates. But don't read the notes in the back until you've read the book!)
Posted by Kara K at 9:31 AM