Grief is the Thing with Feathers 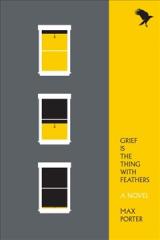 Grief is the Thing with Feathers by Max Porter, 114 pages
A brilliant little novel, told in verse, unfolds in the voices of a man recently widowed, his two young sons, and Ted Hughes’s Crow. The man and his sons take turns talking about the hole in their lives the death of their beloved wife / mother has left. The man, a Hughes scholar, is grief-stricken, lost and longs to live in the past. The boys are wildly undone, confused about what has really happened, saying,


“Where are the Fire Engines? Where is the noise and clamor of an event like this?”
They are the best characters, they retain their brotherly separateness, their special shared grief, to adulthood.
The Crow, well I haven't read Hughes, and have only read a little Plath, so I don't understand him, but he's a interesting voice. Crow explains and probes and protects. He's there until the man and the boys no longer need him. Crow picks at the wounds, but keeps stronger mythical beings who mean the family more harm, at bay.
It's a moving book, it packs so much into such a small volume. It's really well worth a read.
Posted by Patrick at 12:28 PM