Flight: Volumes 1, 2, 3 by Kazu Kibushi and many others.
volume 1-208 pages, volume 2-351 pages, volume 3-431 pages.
A series of excellent collections of short graphic stories by a wide variety of artists and writers. Many of the artists appear in more than one volume and some of the stories continue from volume to volume, but more often the artist begins a new tale. Well worth the read.

Posted by Patrick at 7:32 PM No comments:

Stranger in My Own Country: a Jewish Family in Modern Germany / Yascha Mounk 261 p.

Extremely interesting and readable, but a little hard for me to review.  Mounk is now a graduate student in the United States, but was born and raised in various parts of Germany, after his mother's family migrated there from Poland after the war.  Mounk narrates his increasing sense as he matured that as a Jew, he would never truly be German as well.  Partly a recounting of personal anecdotes in which he experiences philo-Semitism (as opposed to the anti-Semitism of earlier generations), and partly a sketch of Germany's postwar history and relationship to its past, Mounk is convincing and graceful in his presentation.  It's difficult to evaluate how important some of the trends he describes truly are, in particular what he describes as Germany's recent insistence on reaching the 'finish line' of apologizing for their past.

For me, the most powerful part of Mounk's writing is his comparison between German/Jewish relations and Black/White tensions in the United States.  He is thoughtful enough not to overstate his case here, but there is a lot of food for thought.
Posted by Kathleen at 9:05 PM No comments:

OMG, the photos in this book are SO CUTE.  You really need to see them yourself.  Traer Scott makes her way into taking photographs by hanging out at rescue places and zoos.  Some of her stories are amazing because these are all wild animals and the utmost care is taken to protect them and keep them safe so when a porcupine climbs into her lap, it is pretty amazing for all.

Great photos, great narrative, this is book is a treasure.

check our catalog
Posted by Christa at 4:16 PM No comments:

The narrow road to the deep north, by Richard Flanagan


You won’t be able to forget some of the images in this book…..  A thoughtful, and disturbing, story of one man, Dorrigo Evans, who is captured not only by the Japanese in World War II, but in many ways, his subsequent fame as a survivor of the building of the Thai-Burma Death Railway in 1943.  POWs were used as slaves to accomplish this almost impossible task in the jungles of what was then Siam.  Dorrrigo has risen from an impoverished background in the outback of Tasmania to become a surgeon.  In addition to trying to save the sick and injured in the POW camp with no medicine or equipment, he is tortured by the memory of his brief affair with Amy, the young wife of his much older uncle, just prior to his going off to war.  The Japanese commanders, who look down not only on the Australians under their control, but on the Koreans who serve with them, are a complex mix of loyalty to their Emperor, cruelty, and poetry.  The back of the neck, which I have read elsewhere has an erotic meaning in Japanese culture, is also where the sword lands.  Death comes in many ways, all of them unpleasant and graphically described.  After the war, Dorrigo returns to eventually marry Ella, the society woman he was more or less engaged to prior to meeting Amy.  He has learned from a rare letter he received from Ella in the camp that Amy has died in a gas explosion that killed his uncle and leveled the hotel he and Amy ran together and where Dorrigo and Amy had their trysts.  Life goes on.  Guilt and memories go on. Even worse, memories begin to fade and he can no longer remember the face of Darky Gardiner who died after a savage beating for an action he was innocent of.  A sketchbook Dorrigo salvaged after the artist, Rabbit Hendricks, died horribly of cholera, becomes a famous artifact from the war and Dorrigo finds himself a reluctant hero in demand for charity boards, speeches, and fundraisers.  He drinks, he womanizes.  Just as you think no more can happen, there are twists to the story that will surprise you.  I was strongly reminded of Dr. Zhivago (and, no, I haven’t read the book – just seen the movie).  334 pp.
Posted by Linda at 3:45 PM No comments:

Aida Mollenkamp's keys to the kitchen

This is a great book that takes you through step by step how to do things in the kitchen, how to identify ingredients and cuts of meat, how to plan a meal and how to clean up afterwards. Really encyclopedic in a way but very easy to read and interesting from start to finish. A real inspiration to get out of my cooking rut and try new things. I can see myself going back to this book over and over to consult on a variety of things.

check our catalog
Posted by Christa at 2:25 PM No comments:

Ouch! For all you economists out there, Madrick makes a good case for calling you posers.  As a lowly undergrad econ major, I've harbored my own doubts about what is actually known and what we are still talking about in theory.  Seems like a lot of theory and very little "known".  But this is an area where many arguments can be made, and they are, so proof is hard.  Maybe because the ideas a a little wobbly.  The seven ideas are all familiar but the last one is the real gutsy one that portends that economics is not a science at all and all this higher math that doesn't give concrete results is proof.  Ok, hold onto your hats and join the ranks of social scientists.  If you do so, you will probably have better results.  At least that is what Madrick is saying.

check our catalog
Posted by Christa at 2:12 PM No comments:


Laureth has every reason to abandon all hope when their author father seems to disappear out of the country. He is supposed to be in Switzerland , but his phone is found in New York City. She is blind and responsible for her seven-year-old brother. This resourceful teen “kidnaps” her brother, so that he can “be her eyes” to get them to the airport to fly from London to New York City. They find his notebook that chronicles his obsession with coincidences. (Sidenote: the author’s inclusions of unbelievable, but confirmed coincidences are amazing). This taut, slim book is cleverly crafted; interweaving characters, plot and details of the blind experience will be eye-opening to all readers.

Posted by Marilyn Kidreader at 11:26 AM No comments:

Listening is an Act of Love 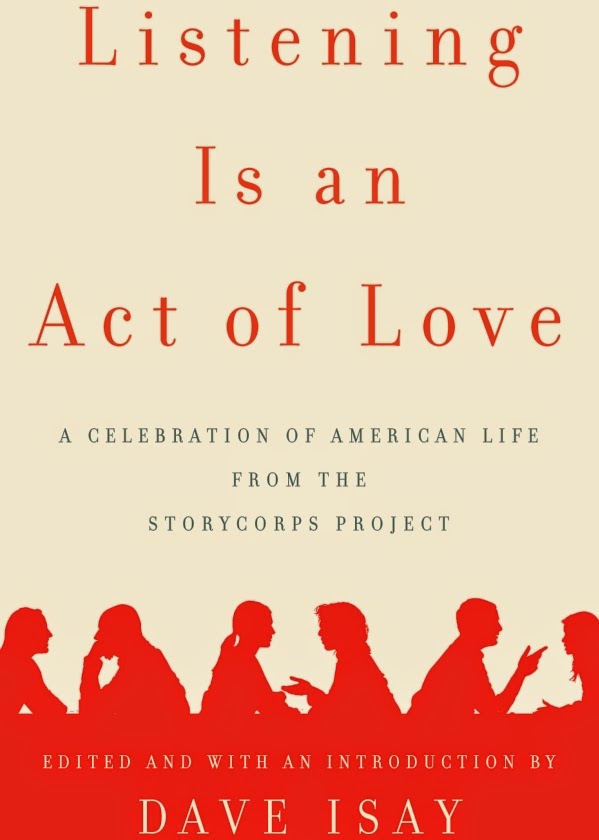 Listening is an Act of Love: A Celebration of American Life from the StoryCorps Project edited by Dave Isay, 284 pages

StoryCorps is an oral history project dedicated to telling the American experience through the stories of everyday Americans. Interviews take place between two people who know each other well (siblings, parent and child, friends, spouses, etc.) and are recorded by facilitators at locations around the country. The full recorded interviews are archived by the Library of Congress, and edited segments are aired every Friday on NPR's Morning Edition.

Listening is an Act of Love is a collection of StoryCorps transcripts, and is named after one of the main tenets of the project. The stories presented in this collection are fantastic, and evoke a wide range of emotion, from giggling amusement at the anecdote about a man's father's prosthetic leg to tearful pain at a woman's recollection of taking care of her brother as he died from AIDS. Particularly harrowing is the final section, which collects stories about storytellers' experiences with 9/11 and Hurricane Katrina. But each of the stories is a reminder of the humanity of everyday people. Some of these stories have probably been told a million times within the teller's family, but they are of course new and touching for those of us who weren't at the dinner table those evenings. I'll definitely be reading more of these.
Posted by Kara K at 11:26 AM No comments:


The King of Snark has done it again. Jon Scieszka has delivered a witty tale that skewers children’s lit of yesteryear. Strikingly designed to look like a damaged Little Golden Book, this book stars Alex, a young revisionist who takes it upon himself to “transform” the insipid story about a “birthday bunny” into a macho action figure: “BattleBunny”. After all, what young man would be thrilled with a birthday book about a tame little bunny when his mind is full of danger and destruction? Armed with a pencil, birthday bunny gains a menacing eyepatch, a WWF wrestling belt and an Evil Plan. Parents, please keep the pencils away from library books, but do share this delightful romp with your little guys.
Posted by Marilyn Kidreader at 11:07 AM No comments:


This is not your typical graphic novel. It is a delectable memoir infused with tasty vignettes centered on food. The author’s parents were passionate about food and passed down their beliefs to the daughter who grew up in the kitchen. Mom is an amazing chef and dad is gourmand. They knew many of the big names in the restaurant world. While their marriage did not survive, they remained friends and encouraged their daughter to experiment with food and life. The overarching message to the reader is: savor life and food. Recipes are included.
Posted by Marilyn Kidreader at 10:49 AM No comments: