We Ride Upon Sticks 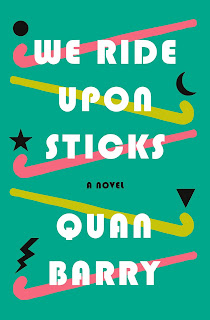 We Ride Upon Sticks by Quan Barry, 384 pages

It's 1989 in Danvers, Massachusetts, and the varsity field hockey team is having their first winning season in AGES. The team's turnaround dates roughly to their summer camp, in which the goalie wrote a dark pledge and signed her name in her Emilio Estevez-adorned journal, soon pressuring her teammates to do the same. Are the two related? The team certainly thinks so, given their town's history as the original location of the 1692 witch trials. But is it that or just young women starting to stand up for themselves?

This is a funny, sharp, and surprisingly complex look at teen life in the late 1980s. Barry follows each team member for a chunk of the book, by the end, giving the reader a full scope of their lives. It's equal parts The Cruicible and My Best Friend's Exorcism, with a bit of Heathers thrown in, and it's absolutely fantastic.
Posted by Kara K at 3:32 PM